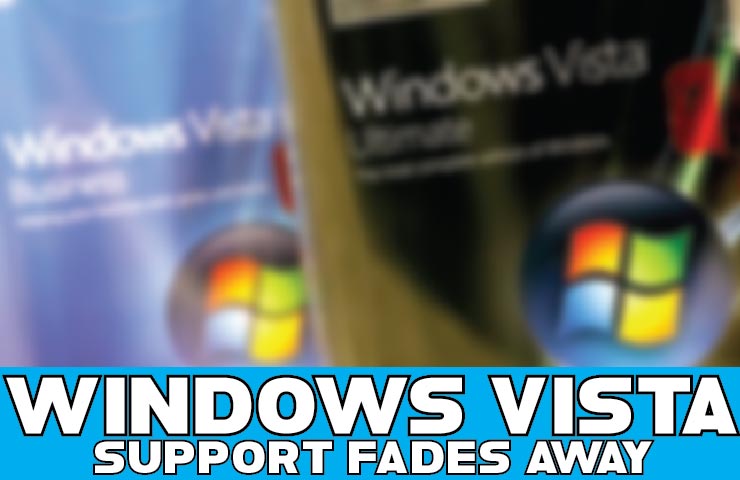 Extended Support For Windows Vista has stopped as of April 11th.

It was 30th January 2007 when Microsoft launched its much-anticipated operating system to replace Windows XP, Windows Vista. Windows Vista was supposed to be a massive shake up to the Windows operating system, but was marred by delays and instability that cause a lot of computer users to simply stick with Windows XP. Windows Vista wasn’t all bad however with new features such as Aero introduced for the first time. Aero gave Windows a completely fresh look but still kept what was familiar from Windows XP. Windows Aero however wasn’t great on older computers or computers with low specifications again leading to criticism by the computer using community.

Overall Windows Vista helped pave the way to arguably the most popular Windows ever… Windows 7. Windows 7 arrived on October 2009 and was very quickly adopted by the Windows community to replace Vista. Windows Vista was a dark stain on the Windows brand at the time, and it didn’t age well… It’s with no surprise that Microsoft have now finalised their support of Windows Vista. Windows XP support ran out in 2014, Vista 2017 and Windows 7 scheduled for 2020.

If you haven’t yet Updated to Windows 10, you really do need to consider it. With Windows XP & Vista no longer supported you run a much higher risk of security breaches. While Windows 7 SP1 & Windows 8.1 is still supported, most of the effort is going into Windows 10. And with good reason. We believe Windows 10 is the best version of Windows yet.

If you’d like to upgrade to Windows 10. Let us know. We’ll make our recommendations based on what you need. 03 5368 2611. Ballan Computers, Onsite Servicing in Ballan, Ballarat & surrounding areas.