set id The NBN in Ballan 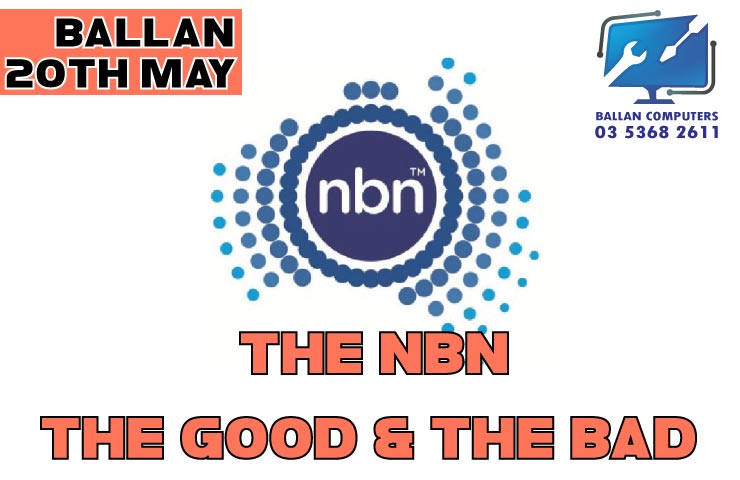 It’s getting closer. We’ve been telling you all over the last few months about the NBN. It’s almost time. According to NBNco, the scheduled date for Ballan is 20th May. It is estimated, the Ballan rollout will connect around 1200 homes and businesses to the NBN.

With anything as large as the National Broadband Rollout, there are good and bad points. In this post, we’ll cover both.

Let’s start with the good.

Cost – Plans for the NBN are actually quite competitive considering the speed upgrade. For example, IINET have a 1TB plan with included line rental, local & national calls for $79.99 per month! Think about this, A standard Telstra residential line is at best $39.95, then you add a $50 ADSL internet plan and you’re over the NBN plan cost and you haven’t even included calls yet!

The Options – Having access to super fast internet is one thing, but think about what you can do now that you were not even considering with your ADSL connection! Netflix, Stan, Presto, Spotify, Youtube. The works! It doesn’t stop there...  Will the access to superfast broadband allow you to work from home more? Connect with family via video chat such as Facetime or Skype with a good image? Yeah the options are endless. (Consider a large data plan if you might use these.)

The Rollout – The NBN rollout has caused some issues in places it has been activated. Community issues such as infrastructure damage, marking on paths, general mess and tech issues on the current network are just some of the issues. Then you look at issues that affect you more directly, such as messy installs, digging up gardens, asbestos in pits and poor communication. Our advice on the NBN is simple, do it early and stay in control. Ask questions, hold your Telco accountable. While your Telco isn’t directly responsible for the NBN connection, it is up to them to ensure it goes through quickly and without issues.

The Phones – In the ADSL era, your phone lines were responsible for delivering your internet connection, now, it’s the other way. Your phones can now be delivered in two ways, via a VOIP handset where your phone number sits in the cloud, or through the UNI-V port which is closer to what you’re used to. You may need a private technician to connect your phones throughout your home or business.

The Sell – This is arguably one of the most annoying parts of the NBN... Salespeople. You will be flooded with mail from Telco’s, phone calls, internet advertising and even posts such as this one all trying to get noticed. Another good reason to get it done early. You won’t need to pay attention to any of it! You will get told many things by different salespeople trying to get your NBN business. It’s their best chance to get you away from Telstra and while that may be a good thing for some, we suggest making sure you know what you’re getting for your coin.

In conclusion, the NBN will speed up life in Ballan, something that has been sorely needed for years. Our advice is to make sure you are well informed and don't make any quick decisions you might later regret. Ballan Computers are happy to have a chat with you about the NBN if required.

Update 26-8-17: November, Copped will be disconnected.

Update :- Ballan Phones & Internet to be cut off.

See another NBN post by Ballan Computers. How to Setup your NBN.

Check your address for NBN availability